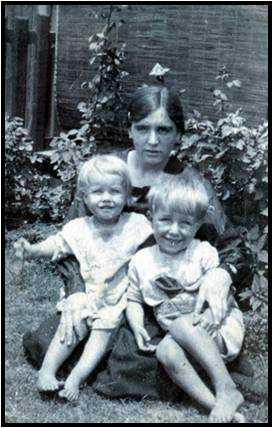 The family lived in Flemington, but moved later to 16 Randle Street, Granville. Mum’s parents, John and Bella Jackson, came out from northern England soon after they married in 1912 and Mum’s Dad, John Jackson, worked on the NSW railways.

This is the earliest photo I have of Mum. She’s the one on the left. I think this might have been taken at the Randle Street house. The other child is Tom Jackson, Mum’s older brother, and the woman is someone they knew as “Aunty” Nell Ryder, although she wasn’t a relative. It was common, even when we were kids, to call adult friends of your parents “Aunty” or “Uncle”.