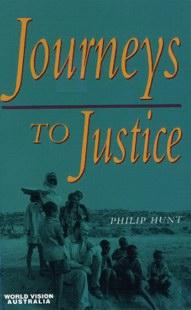 The book "Journeys to Justice," was published by Harper Collins in 1996. The complete book appears here and there are some stories of further journeys after 1996 when I was working in the Middle East and Eastern Europe region of World Vision International.

From the Back Cover Notes

Philip Hunt has found himself on the pillion seat of the leader of Mozambique's terrorist army, dodging rocks and rubber bullets on the Gaza Strip, and introducing Bob Hawke to Somali war lords.

Journeys to Justice is the story of Philip Hunt's journey. It is a lively and fast-paced travelogue through some of the world's unique places - not usual tourist fare. But this is a book which offers insights into more than geography and culture - it also tracks an inner journey. The journey 'towards justice' within Hunt himself. Hunt writes with flair and clarity about the challenges we face in making real a vision for a better world.

Philip Hunt is a former Brisbane disk jockey who joined World Vision Australia in its communications department and later became the chief executive of this $100 million agency.

The entire book is reproduced here with some photographs that did not appear in the original. Further along are stories from "More Journeys" while with World Vision after the book was published.

You can still purchase a copy of the original book from here. There is also a version for Kindle available here.